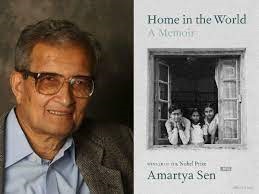 Home in the world by Amartya Sen

Memoir of the 1998 Nobel Prize Winner for Economics

This memoir is, of course, first and foremost, full of economics. It is a first-hand account of actual happenings in the academic world of economics during the fifties into the seventies of the last century. The author, Amartya Sen, outlines his life, beginning with his early years spent in Mandalay in Burma, then Dacca, finally settling into school without walls in Santiniketan, West Bengal in India. He mentions how he was influenced by his scholar grandfather and the Tagorean philosophy andsystem of education. He attends college in Calcutta graduating to study further at Trinity College, Cambridge. He returns back to India to teach at Jadavpur University. Later, he teaches at D-School at Delhi, the capital of India. The book is about a distinguished journey by a brilliant scholar and thinker who has more than one home in this world and is comfortable in all his diverse homes.

This book is for economists. There are many references to well-known economists of the mid-20th century and their work. Books are referred to which will make for further reading, both for economists and for readers like us, who know no economics. This book is for Bengalis, the people of the state of West Bengal, India and the people of Bangladesh. There is a lot of history which they would find interesting. The Rivers of Bengal and The Urbanity of Calcutta are particularly interesting to read. Sen has spoken eloquently on them. The ancient remains found scattered around the general Calcutta region indicates why the British founded the city in the place where they did. And, if you happen to be a Vaidya then you definitely need to read this book written by the most globally honored Vaidya of all.

Amartya Sen comes from a family of professors and scholars. He says that he was more comfortable in expressing himself in Bengali and Sanskrit till he mastered English. So, he proves that it is more important to be a good student of a language rather than to be a ‘native speaker’ of it. The book is most eloquently written. The style is simple and easy to read. The tone is friendly and young. One can go through the almost 400 pages quickly and easily.

This is a truly global book. For world citizens this book is a must read, not only for knowing about economics from a Nobel Prize winner but for knowing about Bengal and about British India.  The book ends rather abruptly. We hope that that means there will be a sequel soon.